The Little Match Girl
It was snowy and dark on a new year’s Eve. Many people were getting together in their warm homes. A poor little girl was still walking in the streets with no shoes. There were some matches in her hand. “Matches, matches!” the little girl cried in a low voice.
No one heard her when they were passing by. She didn’t sell any matches and no one gave her a coin. The wind was blowing strongly and the snow was falling down on her long hair. She felt cold and hungry.
Lights were shining from every window. But the little girl was afraid to go home without selling one box of matches because her father would beat her. “Ah, a burning match may warm me up!” she thought. She lit three matches.
When the matches were burning, she saw a warm stove, a delicious roast goose and a beautiful Christmas tree. But all these disappeared when the flames went out. Then she lit the fourth match. A kind old woman was standing there. “Grandmother!” cried the little girl, “Take me with you.” Her grandmother smiled and held the girl in her arms.
On the morning of the new year, the girl was lying against the wall, dead! 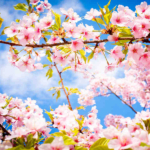