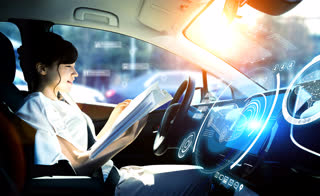 Trips can be made easier and more fun with self-driving cars. TUCHONG
无人驾驶时代到来，你准备好了吗？

Could you imagine being in a car driven by a computer, not a human? Recently, China has made a big step toward self-driving technology. Since August, driverless taxis can run on roads in Wuhan, Chongqing and Shenzhen.

Why do we develop self-driving cars?

Self-driving cars give us many benefits (好处). They use computers to sense (感知) the things around them and make better use of space. This means fewer traffic jams (堵塞) and better parking of cars. For disabled (残疾的) or blind people, self-driving cars can also help them get around more easily.

According to US Centers for Disease Control

and Prevention, each year, more than 1.35 million people are killed on roads around the world. Many more are injured (受伤). Self-driving cars could reduce (减少) road accidents by 90 percent and save governments a lot of money, said the website TechDim. The main cause of car accidents is human error (错误). By using computers, self-driving cars don’t make poor decisions or lose focus (注意力) like humans do.

But self-driving cars aren’t perfect. If something unexpected on the road happens, self-driving cars can’t react (反应) as fast as a human driver could.Also, during weather events like heavy snow, self-driving cars would struggle (费力) to see the lines on the road. It might lead to an accident. The car’s computer system could also get hacked (非法入侵) by someone, causing it to crash or change its destination (目的地).

It’s clear that there is a lot of work to do to make self-driving cars a common and safe sight (景象) on our roads.And China is taking the lead in making this happen, said China Daily.

Here are some common ethical (伦理的) questions related to self-driving cars. You can try having a debate with your classmates on them.

Imagine a trolley (有轨电车) speeding down a track that has five people tied to it. You can pull a lever (操控杆) to change the trolley to another track, which has only one person tied to it. Would you sacrifice (牺牲) the one person to save the other five?

Engineers of self-driving cars have to deal with questions like this. For example, in an emergency, should the self-driving car sacrifice others on the road to save the lives of its passengers?

Millions of drivers will lose their jobs if self-driving cars become the norm (常态). How should tech companies and the government deal with this?

Should tech companies tell the public what kinds of decisions self-driving cars will make in emergencies?