A. It is possible to tell whether a person is American or British by listening to his or her speech.
B. Now, English is the language spoken by most people in countries like Canada, America and Australia.
C. They also borrowed “tofu” and “kowtow” from Chinese.
D. Sometimes different people use different words to mean the same thing.

English is spoken by people in many places. It began in England but spread as the British people left their country and made new homes.___

After many years, the English language began to change. The changes were mainly expressions and spellings.______People in England say “underground” while people in America say “subway”. In America an elevator starts on the first floor, but in Britain it starts on the ground floor. “Colour” and “centre” are British spellings while “color” and “center” are American spellings for the same words. Pronunciation of words and ways of speaking have changed as well._____

The English language has also changed by borrowing words from other languages. The Americans borrowed “cent” from old French and “cookbook” from German.___________

The English language is changing all the time, but people from English-speaking countries arc still able to understand each other. 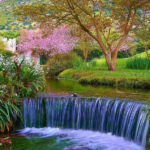 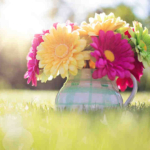